My aunt liked my sleeves so much she decided she wanted a pair as well. So after about 10 days of knitting (most of which was done in the car while commuting to work), they're ready to be mailed off. 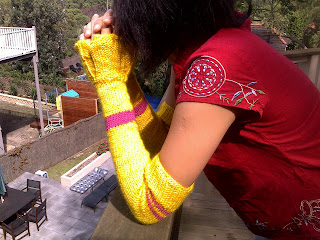 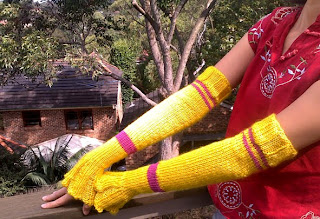 No comments:
Email ThisBlogThis!Share to TwitterShare to FacebookShare to Pinterest
Labels: Knitting

OMG they had sex!

It's an ironical age that we live in.

We like to think ourselves advanced and modern. We like to believe that the sexual revolution helped us in becoming less prudish and more liberated.

We tell ourselves that it's alright for people to have sexual relations outside of marriage. In fact, it's virtually society's norm.

Sex is no longer meant to be something whispered, but something as normal as say, having dinner.

Then why is it that every trashy/gossip magazine that you pick up inevitably revolves around who had sex with whom, when, where and how?

If it's that normal, why are we still gasping when we realise that hey, celebrities have sex too!

And why this endless intense interest in whether Tiger Woods had 101 sexual partners and who Paris Hilton is sleeping with currently?

Ok, so maybe what Tiger did was wrong. There is no way to justify cheating on someone that you've promised to be true to. But I have a sneaky suspicion that the interest is not because of his cheating heart, but because he actually had, OMG, sex! Several times! With several different people!

Why are we so obsessed with something when we keep telling ourselves and everybody else that it's nothing much to talk about any more?
No comments:
Email ThisBlogThis!Share to TwitterShare to FacebookShare to Pinterest
Labels: Seeing the world
Newer Posts Older Posts Home
Subscribe to: Posts (Atom)