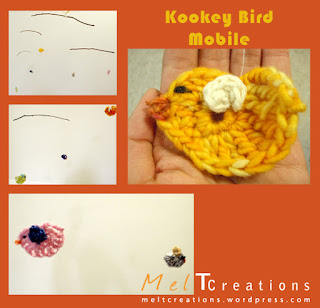 I learned how to crochet! I still feel like I'm using my feet to crochet and I'm completely reliant on YouTube for every single different stitch I have to use in a pattern, but I learned how to crochet! And I made birds! After years of rapid knitting and knowing how to read most knitting patterns, it's kind of a weird feeling learning a new craft again. It's like I've regressed or something.

But these little birdies are probably the easiest little project one can start off with when learning how to crochet, without feeling too discouraged.

Friends are expecting a little one in August and had expressed interest in a crocheted bird mobile, so what better gift than something they want?

I got the twigs/branches down the back of my apartment for the true rustic handmade look and attached the birds using normal cotton thread.

D helped with sawing the twigs to length and constructing the whole mobile. I would have just tied birds to twigs and called it done, but he even went to the effort of finding the centre of balance of each twig, so when hung up, everything balances and twirls oh so nicely and mesmerisingly. Genius, that boy.
No comments:
Email ThisBlogThis!Share to TwitterShare to FacebookShare to Pinterest
Labels: Knitting

It was a friend's birthday party on Saturday and I had offered to bake a cake. Said friend doesn't have a particular love for rainbows. Neither is he a strong supporter of gay pride. I really just used his birthday as an excuse to bake a rainbow cake, something I had badly wanted to do in a while. 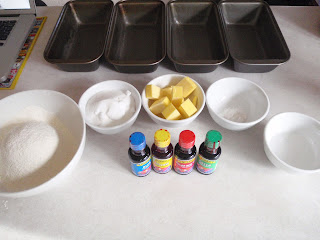 However, I had read somewhere that the trick to maintaining a vibrant colour was to add vinegar, which I obeyed, and hoped for the best. 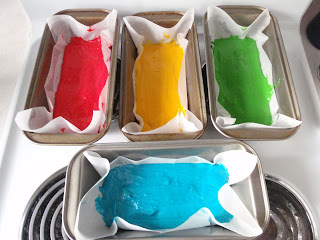 I'm not sure if the amount of food colouring I used constituted "a lot" - half a teaspoon each of food colouring and white vinegar for each layer. However, it had the desired effect and the colours never lost their vibrancy. 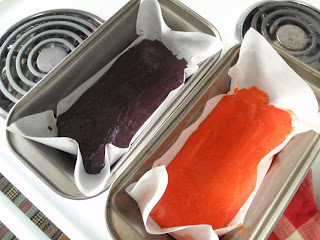 I had to do some alchemy to get purple and orange, but thanks to D's wonderful mathematical skills, that wasn't too hard. 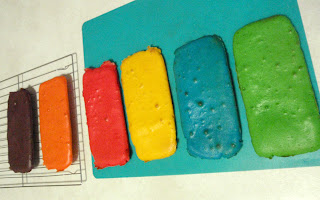 I used a simple white cake recipe for the batter and just separated them evenly by six before I added the food colouring. What I did wrong however, was to put them in the oven for the same time indicated in the recipe. With each individual colour being such thin layers, I could have left them in for about half the time and ended up with a cake that would have been more moist. 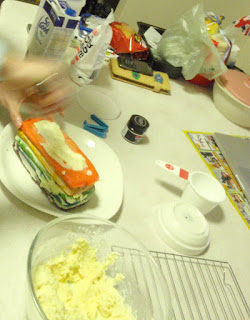 However, it wasn't a problem that sweet icing couldn't cure! 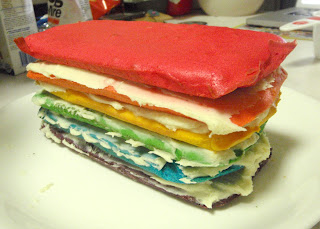 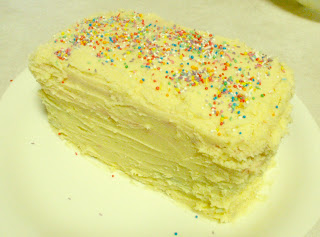 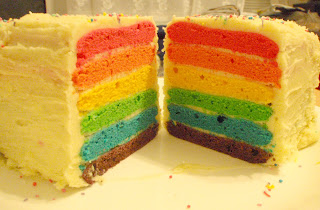 No comments:
Email ThisBlogThis!Share to TwitterShare to FacebookShare to Pinterest
Labels: Baking 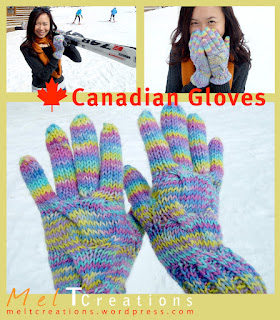 So the only thing Canadian about this is the fact that I made them in preparation for my trip to Canada about four months ago. I've only ever made fingerless gloves before, so this was a bit of new challenge for me. To make it even more difficult, I actually decided to come up with my own design.

In all honesty though, it really wasn't that had to knit up - took me about a month, which included being distracted by other things and really only spending an average of 15-20 minutes a day. So don't let what I've said put you off. This is really a quick and easy knit.

What wasn't quick was the fact that it took me much longer to decipher all my notes and write up the pattern. But I finally did it, so you can knit a pair for yourself too!