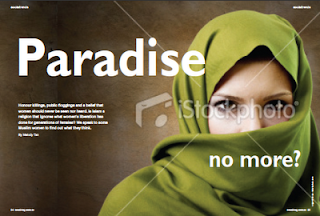 Article written as part of a subject for my Master of Publishing course.

And if you're interested, my (almost) complete writing portfolio can be found here.

If you prefer not to download the pdf, article text is as follows:

Before Muhammad founded Islam, he lived with a Bedouin family in the desert, folks who had long ago associated verdant oases with paradise. That idea remained with Muhammad and green has become Islam’s traditional colour, a promise of blessings and happiness. But is trouble brewing in paradise?

The global debate is rife and often negative when it comes to discussions about what rights Muslim women have. This is fuelled by frequent media reports on stories such as women as young as 12 who are forced to marry their first cousins and the strict sharia laws that support “honour killing” for women who defy the tight rein husbands, fathers and brothers have over them.

And the perception is not only that Muslim women have no rights, but also that they willingly choose to relinquish them. As politician Bronwyn Bishop puts it in a 2005 interview with ABC radio, “Some people are comfortable in a position of being a slave. Some people can’t deal with the choices that freedom offers.”

How can all of that be called paradise?

Surprisingly, the idea that Islam is a religion that restricts women is preposterous to many young Muslim women in Australia. “Why would someone accept to be oppressed?” asks Sydney University law student Ruveyda Ozturk, whose father is an imam (an Islamic spiritual leader).

22-year-old Ozturk, who was born in Turkey and moved to Australia with her family when she was 10, believes that any woman who actually understands the teachings of Islam will never find it oppressive. “[Oppression] definitely doesn’t form the religion itself. I really haven’t felt that kind of oppression at any stage when it comes to my family,” she says.

Rahil Ansari, 24, agrees. Although raised in a family with a Muslim background, Ansari only chose to practice Islam eight years ago and cites this ability to choose her religion and who she married as examples of the kind of freedom that Muslim women experience.

“My dad had a big issue the day I decided to wear the scarf. He almost gave me a lecture as to why I shouldn’t be wearing it,” Ansari says of the hijab, a symbol used by many to prove that Muslim women are forced to do things against their will.

As Waleed Aly, author of People Like Us: How Arrogance is Dividing Islam and the West, suggests, the current Western fixation on and perhaps exaggeration about the oppression of Muslim women is a political issue. And it started, he argues, when America needed ammunition for justifying their “War on Terror”. The need to ensure the rights of women in Afghanistan was a convenient excuse, considering Western politicians show little concern about “child sex slavery in Thailand, dowry burnings in India, or the selective abortion of females that occurs throughout the world”.

Of course, the idea that Muslim men clutch the rights of their female counterparts with a deathlike grip is not without some justification, as seen in the laws passed by the Taliban while in power in Afghanistan. Women were not allowed to work, be educated or even walk the streets freely without donning a burqa and accompanied by a male blood relative, and public executions and flogging of women were common.

However, “the patriarchal elements within Muslim communities are…sociological rather than theological,” says Dr Shakira Hussein, a postdoctoral researcher specialising in issues surrounding Islam and gender at the University of Melbourne.

“Some things are being done in the name of a particular version of Islam but I don’t think it’s the religion that generates that…the patriarchal readings of Islam are not inherent to it.”

Ansari, who was born in Afghanistan, agrees. “There’s a verse in the Koran, it says ‘there is no compulsion in religion’. That pretty much tells you that you can't oppress someone and you can’t make someone do something that they don’t want to do,” she says. The Taliban, she believes, is an extreme example of what the religion would be, if interpreted wrongly.

“It boils your blood when you think of some of the stuff [the extremists] say. Where did they get these teachings from? Are we reading the same book?”

The Koran, according to Ozturk, does put certain restrictions on females that could be seen as oppressive, especially if taken from a Western point of view – Muslim women are not allowed to date (by a Western definition) and are required to dress modestly.

“If your parents tell you not to have a boyfriend, it doesn’t mean they’re oppressing you in an Islamic sense,” Ozturk says. “I don’t see it as a form of oppression but as a way of instilling in you the right values and standards so that you are able to observe your faith.”

Ozturk agrees that this prescription of what one should do or wear can be a form of oppression if done in the extreme. But she also believes that in general, Muslim women are not voiceless puppets and are in fact held in high regard within their community.

So while it’s usually Muslim men who dominate discussions on Islam matters, the female interest is present because of the woman’s “important position as the head of the family in the household” and the influence that she wields.

This lack of female representation in the leadership context is of concern to Hussein. While many organisations may have formed to address the needs of Muslim women, she sees it as a form of “rather than let the girls in to play with the big boys, let’s give them a little playground of their own”.

But this playground is, Hussein admits, not without its benefits. As she speaks to the Muslim women involved in such organisations, she discovers that often they are able to adopt better strategies to address issues that affect women than if it were left to the men.

“In my life and in my experiences as being a Muslim, I have never felt that my voice hasn’t been heard. When we’re making decisions, we do them in consultation with all of us,” says Ansari, who works with both Muslim men and women in her work in the Affinity Intercultural Foundation, an organisation that tries to increase awareness of the Muslim community, its religion and culture.

“If you were to understand the religion, understand the wisdom behind why people practice it the way they do, and why people instil the values that they instil within their lives, then you realise that it’s normal, it’s acceptable and it actually means a valuable lifestyle for these people,” Ozturk says. “Even though from a Western approach, it might not seem like that in the first instance.”

Hussein, Ozturk and Ansari, all intelligent, assertive and successful women in their own right, are quick to point out that they would not be Muslim if the religion were indeed oppressive to women. In fact, Ansari says, “My religion empowers me as a woman. It’s like a divine right to be here. God has commanded me to do certain things and it makes you feel empowered [knowing that]”.

And so Islam still holds the promises of blessings and happiness that Muhammad taught. Islam is still a pathway to paradise for all those who follow it. The question is, when outsiders look at Islam, whose interpretation and whose cultural context are they doing it through?

“There is no oppression…but when you lack a conversation [with Muslims], you’re open for all sorts of misunderstandings and misinterpretations,” Ozturk says.
No comments:
Email ThisBlogThis!Share to TwitterShare to FacebookShare to Pinterest
Labels: Seeing the world
Newer Posts Older Posts Home
Subscribe to: Posts (Atom)