What do you do when you have leftover yarn and want to make something absolutely unique for an aunt who likes jewellery? 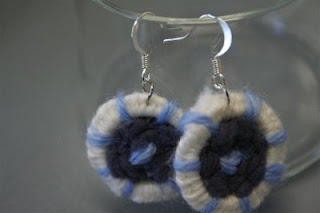 I wanted a fast and easy project while driving west to go camping last weekend, and my entrelac headband definitely didn't fall into that category.

So instead, I decided to make a neckwarmer with some leftover yarn that I had. I wanted to play around with beads as well and so I ended up with this. 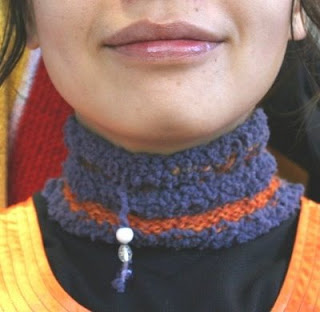 Honestly, not my proudest moments.

I had wanted to add more hanging beads, but I couldn't find beads with holes big enough that could fit through the needle that I needed to thread the yarn.

So I have a strange neckwarmer thing with some random beads hanging off it.

On the upside, it's nice, soft and keeps my neck warm without any peripherals hanging off it that make me either feel like I'm wearing a bib while eating or get in the way while I'm trying to get stuff done!
4 comments:
Email ThisBlogThis!Share to TwitterShare to FacebookShare to Pinterest
Labels: Knitting

It's a rather interesting pattern to follow but a number of stitches sounded rather confusing.

And it's funny how people respond when you ask them questions.

"Why would you want to try something like that for?"

They proceed to teach you, but not without some sort of admonishment that you've somehow decided to become a rocket scientist or something, mind you.

I agree. The pattern is somewhat difficult. My project was going fine, but there were tiny mistakes I knew should not be there. And I just could not get it.

But I persevered and did more research, and tried to get the thought that I was really attempting something really difficult out of my mind.

And then I got it.

So even though I was about a quarter of the way through the pattern, I ripped all the yarn out and restarted my project.

It's going beautifully now. I understand the pattern. I know the stitches, and honestly, it really isn't that difficult. Just a bit of a hassle because you need to turn your work every six stitches.

But I was nearly discouraged and wanted to give up trying because of the words of some, who gave me the impression that I was simply too ambitious or stupid to try something like entrelac.

Had they simply given me instructions and encouragement, I may actually feel better about working through my pattern. Instead, I was constantly shrouded with a feeling of dismay and impossibility.

Our words have an impact on people. And we need to be careful of what we tell them.

Yes, their dreams may seem impossible, even ridiculous to us.

But perhaps we need to take time to see the possibilities, and support them as best we could. Instead of cutting them down before they have even taken root.

Reckless words pierce like a sword, but the tongue of the wise brings healing.

I wrote this as a script for a show we do at work, but it's such an important issue I felt I needed to write about it here as well.

Did you know that up to four million people are victims of human trafficking each year?

People who are trafficked are exploited and this can mean anything from forced labour, slavery to prostitution.

Women, when forced into prostitution, generally work seven days a week, 12 hours a day. Many are not free to reject a client or unsafe practices and live under constant fear of contracting HIV and other diseases.

When forced into labour, victims are paid far below poverty wage in sweatshops where only two bathroom breaks are allowed in a 14-hour workday.

My word, are we as Christians doing anything to stop this monstrous atrocity against God’s children?

We need to use our voices and resources to raise awareness of human trafficking in the community and educate others.

And we also need to become more conscious of the things we buy. Enslaved persons can be directly or indirectly involved in the production of goods and services that we use every day.

We can help them by becoming ethical consumers who support businesses committed to offering Fair Trade certified products.

Do something to help your brother and sister in Christ today.

Fairwear
No comments:
Email ThisBlogThis!Share to TwitterShare to FacebookShare to Pinterest
Labels: Seeing the world

Ahhh...good old journalism is no longer what it used to be thanks to the rise of public relations... 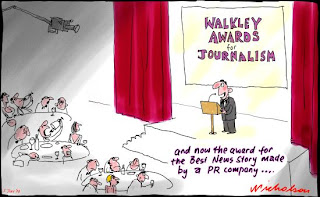 While not exactly accurate, I have to say that there is some element of truth in it.

Being in the PR industry now, I'm no longer able to view news the same way. I'm always watching/reading news going, "wow, the PR rep did a good job on that one" or "hmmm, I think they need to get their messages right".

As for objectivity in news, I'm not sure it exists anymore.

It's not every day that one sees her work being analysed like a literature text by others.

Right in front of her.

Had a meeting this afternoon about a weekly current affairs/talk show that we do. In it, I wrote a 70 second editorial and we were discussing the contents of it today.

It was the most bizarre experience.

Two of the team members were having a rather heated discussion about what "the author is trying to say".

Yes, I'm the author, and I'm sitting right there. But it was not a matter of "what are you trying to say Melody?". It was more like "this is what I think she's trying to say."

Somehow, I felt a lot like Virginia Woolf or Shakespeare or someone, whose literary piece is being critiqued and anaylsed by a classroom of budding English literature students.

I also wanted to put my hand up and say, "Guys, you don't have to guess what I'm thinking, I'm right here. I'll tell you."

The only problem was that some of the analysis, while it made sense, was certainly not what I was trying to say. In fact, far from it. I had no intention whatsoever of giving any of that kind of impression.

And yet, there was a logical argument backing it up, like any good English essay should.

But it made me sit back and smile and wonder (yes, all this while the discussion was still going on) as to whether we tend to over-analyse what the great writers are trying to say while in English Lit classes?
No comments:
Email ThisBlogThis!Share to TwitterShare to FacebookShare to Pinterest
Labels: Seeing the world
Newer Posts Older Posts Home
Subscribe to: Posts (Atom)