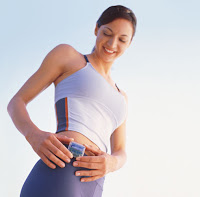 I've just recently started the 10,000 steps challenge as part of work and am starting to discover just how sedentary my lifestyle is.

Day 1: Logged 8000 steps, but only because I went on a 50 minutes walk in the evening to boost my step count.

It's currently 5pm and I have only logged 4500 steps. I don't really have the motivation to go to the gym today, but looking at the number of steps, I'm starting to wonder if perhaps I should.

It's funny how when you've actually set a goal, you have this insatiable urge to achieve it. Now that I actually have this target of 10,000 steps a day, I find myself more willing to walk around the office. In fact, finding various excuses of things that I need to get done that requires me to walk.

Or maybe I'm just realising how inactive I am and that I perhaps need to move more for the sake of my health.

And yet, I'm so sedentary that I still cannot hit my target without the help of some planned physical exercise!
No comments:
Email ThisBlogThis!Share to TwitterShare to FacebookShare to Pinterest
Labels: Ponderings

Three reasons why I love spring

And for the one big reason why I would rather we skipped spring and went straight to summer? Runny noses and itchy eyes.

Oh hayfever, how I wish you and Spring weren't such good friends.

Why do they call it hayfever anyway?

I guess hay may have something to do with its historical origins, but fever? The only thing warm about me during a hayfever attack are my nose and eyes from all that friction of rubbing them!
No comments:
Email ThisBlogThis!Share to TwitterShare to FacebookShare to Pinterest
Labels: Ponderings

So those with Facebook accounts would have noticed some changes recently. No, this is not a post about whether the changes are good or bad, but about the reaction that Facebook receives whenever it makes a change. Two words:

Having been an early-ish adopter of Facebook, I have seen the social network site go through numerous changes over the last years. Yes, some of them were a little dubious. Others were simply . . . different.

And it seems that that's precisely what gets everybody heated up. "Why can't Facebook keep things the way it was before?"; "This new [insert appropriate feature] is so stupid. I preferred the old feature" and "Stop changing, Facebook" are the common complaints that pop up all over Facebook and the rest of the internet whenever something new happens.

But seriously, are the changes really that bad? Or is it the change in itself that's bad?

Yes, making a change requires us to change in response. But isn't that something to be embraced? It keeps things fresh and in the process, we might end up discovering something new!

The thing about these changes and the response is that after a month or so, the kerfuffle dies down, everybody lives with the current situation until the next change comes along and it starts all over again.

What about simply taking the change in your stride instead of wasting your energy complaining about it?


Even if you don't believe in Christianity, I reckon this video may be of interest purely from its editorial point of view. And I have a weakness for cool raps that I can actually understand.
No comments:
Email ThisBlogThis!Share to TwitterShare to FacebookShare to Pinterest
Labels: Walking with God
Newer Posts Older Posts Home
Subscribe to: Posts (Atom)