For the purposes of this argument, I'm specifically thinking about inspiration on things to write about. I find that inspiration hits me at the most unexpected times.

If I were to force myself to look at a computer monitor and say to myself "write something smart", more often than not, nothing comes. And that's the thing. Inspiration cannot be forced. Inspiration for me just . . . happens.

I got the inspiration for one of the last articles I wrote while waiting in the queue at the bottom of a chairlift at Perisher. It wasn't even because I was trying to come up with something to write about. I was just bemoaning to the boyfriend about how terrible I am at snowboarding.

The best opportunities to be inspired I believe are when you're out and about and experiencing and observing life. It's when you read something and are able to bounce off on its ideas.

And since I haven't really been out and about and/or reading things, I don't have much inspiration to write much in this blog at the moment.

Hopefully "they" let me get out soon :)
No comments:
Email ThisBlogThis!Share to TwitterShare to FacebookShare to Pinterest
Labels: Seeing the world 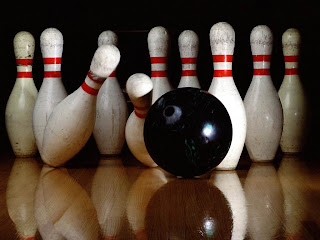 Just got back from an evening out at work's annual bowling "championship" and learned something rather interesting.

No, I didn't learn that my bowling sucks. I already knew that. Most of the time, the ball ends up in the gutter instead of striking anything. I am so bad that one year, I actually won the encouragement award just to make me feel better.

What I learned was not so much positive thinking, than positive focusing.

And so I started the evening trying to do just that.

The first three tries, I failed miserably as the ball went into the drain. There was nothing right to focus on. I wasn't doing anything right at all. But then I actually hit something at the fourth try! And so I simply focused on how I actually did that and I swear, it worked.

For the rest of the evening, I was actually hitting things, even scoring a strike once! I was hitting nines and spares, although there was of course the times when I either missed, or only got three or something. But by my standard, it was a miracle. I actually went from not hitting anything at all over the previous years to actually hitting things.

Not particularly impressive I know, but I reckon if I hadn't focused on what I was doing right, it would have been in the low 20s.
No comments:
Email ThisBlogThis!Share to TwitterShare to FacebookShare to Pinterest
Labels: Ponderings
Newer Posts Older Posts Home
Subscribe to: Posts (Atom)