And if you're interested, my (almost) complete writing portfolio can be found here.
No comments:
Email ThisBlogThis!Share to TwitterShare to FacebookShare to Pinterest
Labels: Seeing the world

It was a natural progression - after all the cupcakes I was baking, I had to attempt cookies (in January this year, I'm only talking about it now). But no, these weren't going to be your normal choc chip cookies, they had to be choc chunk cookies. 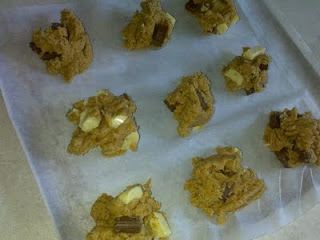 The main reason why I used chunks of Cadbury's milk chocolate (and white chocolate. Yum!) had more to do with economy than anything. On special, they actually cost less than choc chips. And so I cut up two blocks of chocolate and mixed them into the batter. Utter decadence. Mmmm. 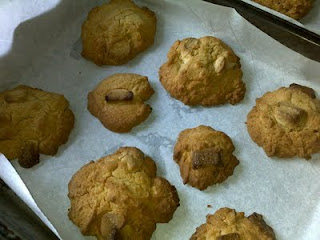 Turns out generous amount of cookie batter on baking tray becomes ginormous-sized cookies when baked. And experienced bakers would know this, but I learned it the hard (no pun intended!) way - cookies become harder after they've been taken out of the oven and cooled.
So if you like soft, chewy cookies, don't take them out of the oven when they've reached the right consistency. Do it before. Naturally, these cookies were a little on the crispy side. But I know for next time - less than 10 minutes it is!
I would share the recipe, except I took it off the net and have no idea where to find it again (I did write it down in my recipe book, silly. I just can't hyperlink it). But it's a typical cookie recipe and if you really want it, let me know and I'll send it to you.
No comments:
Email ThisBlogThis!Share to TwitterShare to FacebookShare to Pinterest
Labels: Baking 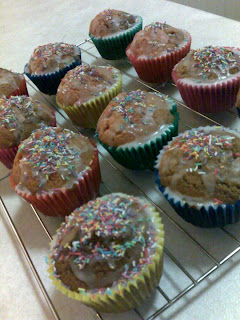 This was meant to be a black and white, vanilla and chocolate, marble cupcake, but I decided to make it red (with vanilla bean paste) and brown (with Cadbury's hot chocolate). This was a more complex recipe, actually requiring me to separate egg yolks and egg whites and involved a lot more intense beating.

The recipe made 16 cupcakes but I didn't realise that only until I scooped all the batter into 12 moulds and put it into the oven. Unsurprisingly, they ended up more like muffins than cupcakes.

I drizzled icing sugar over the top and scattered pastel sprinkles on them. They're still pretty, but I suppose they're not cupcakes per se. 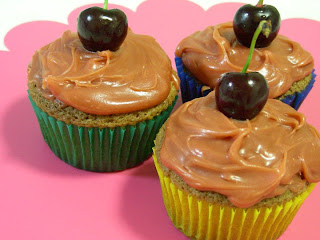 This was actually done in November last year. My first foray into cupcake making with a fairly easy cake recipe.

The topping was a little tricky, since it involved double boiling chocolate (did you know that chocolate can burn and therefore become crumbly and not gooey?). Incredibly decadent chocolaty goodness.