Note: This post will likely only be relevant to you if you are a Seventh-day Adventist.

I'm currently about to start work on an article about Ellen White. For those non-Adventists who have decided to read on anyway, a short answer is that Adventists believe that Ellen White had the spiritual gift of prophecy. She has written numerous literature on God, health and temperance. And for the record, we don't believe either her or her writings are as important as God and the Bible.

Anyway, the reason for this post is because I want to hear from you. Hear why you feel Ellen White is still relevant to the young people of today. Or maybe you don't feel that way?

I want to hear from you.

This is a little late coming, but boy what a great weekend I've had!

Went to the literally long-awaited U2 concert on Saturday night and was absolutely and completely blown away by them. So much so that we had to go back to the stadium yesterday night, having a picnic dinner outside while listening to Bono singing his little lungs out all over again.

But back to Saturday night when I actually saw something.

We had seats directly in front of the stage, but well, several tens of metres back. It was still really good view that didn't require any neck craning, especially since we were in the front row of our section, which was on the second level.

Things got off to a slow start with Kanye West opening for U2. He sang probably about eight songs, of which I only recognised and enjoyed three. The others...let's just say R&B/Hip-hop was never really my cup of tea. Added to that the fact that the stadium was only about half-full.

There was a real carnival feel to the area though, with food stalls set up both outside and inside the stadium. And after hours of waiting, people started getting bored and started doing the Mexican wave around and around the stadium.

At about 9pm (Kanye started at 7pm), the lights finally dimmed and a haunting chanting came across the loudspeakers and there he was. Bono walked out with an Australian flag draped across his shoulders singing City of Blinding Lights.

They actually looked bored and that look practically stayed permanently on their faces for the next two hours.

I have no idea what in the world inspired that kind of boredom because I was so caught up in the electrifying atmosphere I ended up dancing in the aisles, but I don't think a single person got up to their feet besides Sharona and I. We looked around and everybody else in all the other seating sections were standing and jumping and dancing, except ours. The world's most boring section.

It made me wish I was in the mosh pit.

But despite that lack of enthusiasm in my general vicinity, I still thoroughly enjoyed myself. I'll have to admit that Bono wasn't very large and I could not read the writing on his T-shirt, but I could see clearly enough and was aided beautifully by two large screens on the side and a gigantic one on the stage. It was fantastic.

It's been ages since I've been at a rock concert and to return to the concert scene with U2 has got to be one of the most amazing experiences ever. The music was tight, the singing was awesome, the showmanship was spectacular.

They came back for an encore twice and they opened the second encore with the latest single The Saints are Coming, which despite being performed without Green Day was still really good. And how much more privileged can a girl be to be one of the first few in the world to see that performed live at a U2 concert?

(For those reading this on your feedreader, there's a youtube video embedded.)

If only there were more than one of me.

Let me just lie here and close my eyes...

There's some really great advertising of giant painted trucks over at Lee Hopkins.

Thought this one was particularly clever, depicting how Pepsi Light is so "light" it floats up to the ceiling of the truck. 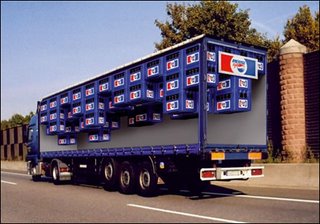 All pretty neat stuff I say.

The magazine was mailed to me last Friday! 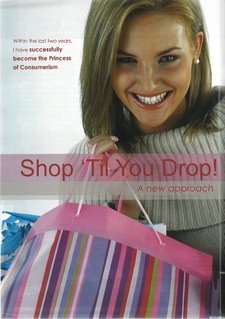 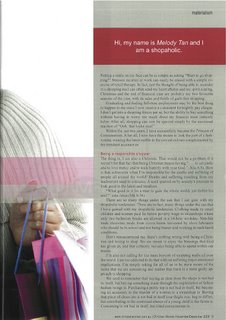 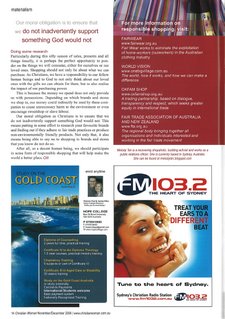 Master of the House

What do you think of when you attend a school production?

I'm not saying you don't expect quality production, but you don't usually associate amazing props and costumes, fantastic lighting and sound, or superb performances from those involved. The performances may be good, but you'll never think you're at Broadway or something.

That got turned on its head when I went to watch Les Miserables staged by the students of Barker College yesterday.

Firstly, there were actually properly published programmes printed on glossy paper (with a full-colour cover) and with extremely well-taken photos of the cast. We even had assigned seatings, although it was a bit of a challenge trying to find seat number 3 when you're really all just sitting on a long bench.

There was actually a full orchestra located in front of the stage and even before the musical started, you could see the really impressively built backdrop and intuitively know that the props and costumes would be as stunning.

And the peformance! It was hard to believe that I was actually watching high school students singing and acting! Powerful voices, smooth acting, I really felt transported to a proper non-school production at times.

Needless to say, I left the hall extremely impressed by the production and the direction of the musical. The interpretation, the staging, the singing, the lighting, everything was just done perfectly.

And I absolutely fell in love with the Master of the House scene in which the actor so wonderful depicted the character. It was as if he was born for that role (whether that's a compliment or not I'm not sure.)

Even this supposedly professionally done version cannot compare to the one I saw last night.

In extremely exciting news (well, to me at least), Company, a novel by one of my all-time favourite author, is finally going to be published in Australia!

A book being published may not be exciting news, even if it was by one's favourite author, but the fact that Company has been available overseas for at least a year kind of negates that. Particularly since Max Barry is Australian and based in Melbourne.

It was intriguing, exciting, highly entertaining, laugh out loud funny and most of all, dealt with subject I could relate with. I have read all of his other books (a grand total of one) since and had been waiting impatiently for Company to be available in Australia.

And come March next year, it will be!