We were driving along Centenary Drive yesterday evening on the left most lane when I saw a man walking ahead of me, in the same direction as the traffic.

He was in my lane (like a car would, except he isn't one or was in one) and completely oblivious to the other cars whizzing past him at 80km/h speeds in the other two lanes (it was peak hour). I overtook him somewhat cautiously, but had to stop at the lights a short distance down the road. That was when he overtook me.

We contemplated winding down the windows to ask if he was alright, but he looked like he was on a mission. By some miracle, cars missed him when he walked across the intersection.

He kept on walking, the lights turned green for me. It didn't take long for me to catch up to him and this time, there was no way I could overtake him as he was in the middle of the lane, and cars in the other two lanes were not letting up.

We were starting to get concerned. Memories of the F3 debacle came to mind.

So I put my hazard lights on, stopped the car and Daniel got out. He ran to the man, who was still walking, while I got the car moving again, trailing behind them with my hazard lights still on.

A car agitatedly beeped at the man/me and I could see that there was a huge line of cars behind me. While Daniel walked with the man trying to find out his circumstance and get him to a safer spot up on the curb, out of the line of the traffic, cars from behind me started pulling out.

As they freed themselves from their delay, I could hear them floor the accelerator hardly, speeding off to wherever they were going. Some even pulled back into the lane in front of Daniel and the man, but  leaving very little gap. It was reckless, it was dangerous, it was an act of frustration.

During the entire debacle, which lasted no more than ten minutes, not one car slowed down. No one even tried to attempt to find out what was wrong, no one tried to ensure the safety of humans on a road full of speeding cars. Instead, all I sensed was frustration and annoyance, as drivers made a point of accelerating loudly and overtaking dangerously.

I didn't look at the drivers. I was too worried for Daniel out there with that man. I wonder if perhaps there were rude gestures from the other drivers.

I honestly don't know what would have been the right thing to do. By me slowing down, I held up traffic. It was dangerous and I recognise that I was probably being a hazard to other drivers. But what was the alternative? To drive off and leave the man to walk the lane alone?

If my car got hit, I would/might/possibly survive in the "protection" of my car. If the man got hit, what chance does he have?

I truly do not know. All I know was I was concerned and yet I felt really bad for holding up traffic. I didn't know which action to choose.

Daniel didn't end up convincing the man to get on to the curb - he started to get aggressive and Daniel came back to the car to avoid a violent confrontation. We called the police who said they would send a car to check it out, and during the phone call, the man stepped on to the curb and decided to have a cigarette.

He looked like he had no intentions to leave the curb, we knew a police car was coming, and so we left.

We left the obviously unstable man there on the side of the road, smoking a cigarette.

My conscience still pricks me for leaving him there.
2 comments:
Email ThisBlogThis!Share to TwitterShare to FacebookShare to Pinterest
Labels: Seeing the world 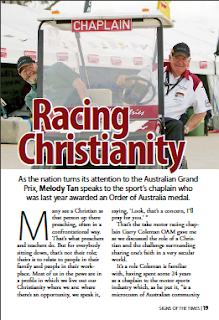 Published in Signs of the Times, March 2011.

And if you're interested, my (almost) complete writing portfolio can be found here.
No comments:
Email ThisBlogThis!Share to TwitterShare to FacebookShare to Pinterest
Labels: Walking with God
Newer Posts Older Posts Home
Subscribe to: Posts (Atom)