I found what I was looking for!

Made a test batch using a shortbread recipe and I'm really quite pleased with the result. 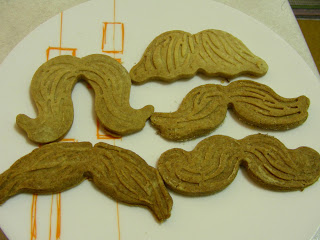 The main problem I had with the recipe was that the dough was a little too crumbly, making it a little difficult to ensure the mo stayed intact when you cut out the shapes. The instructions said to refrigerate the dough for about 30 minutes before cutting them but I reckon while it was good advice, I probably should have waited a few minutes after taking it out of the fridge before I cut it. That would give it time to soften up a little, which made it just that tad easier to separate from the cutter without breaking.

The recipe also said to roll the batter out till about 3mm thick, but I reckon it worked a lot better when it was a bit thicker. The mo shape stayed more intact when cut and it was also easier to stamp the pattern on the dough.

However, all isn't lost even if the mo breaks into half. Simply try to smooth the break together, pop it into the oven and viola! The break disappears.

These will work out great for Movember fundraising efforts. 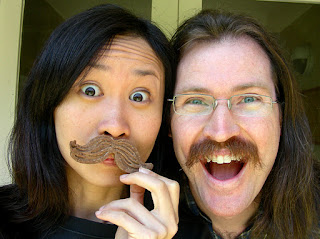 Help support the Movember cause - donate at http://mobro.co/DanielBell 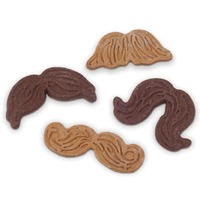 It's that time of the year again where men find a convenient excuse to not shave and end up all fuzzy looking. Movember is almost upon us and the mo' bros and mo' sis will be out in force, helping to raise funds and awareness on men's health.

Don't misunderstand the somewhat ironic tone of my voice. I have no problems with the movement or what it stands for at all. What with my dad falling victim to cancer (granted, bone cancer is not a uniquely men's issue) and D's dad being diagnosed with prostate cancer not too long ago, the issue is dear to me heart.

In fact, I support the movement so much that I'm contemplating getting myself one of these moustache cookie cutters and baking a few mo'kies and maybe selling them for Movember. 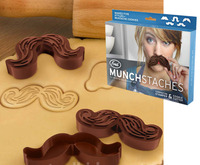 My main problem with this business is that my man got into the whole thing with much enthusiasm last Movember, and may have forgotten the point of it is to shave it all off when December comes around. So I've essentially been dating a gnome for the last 12 months. 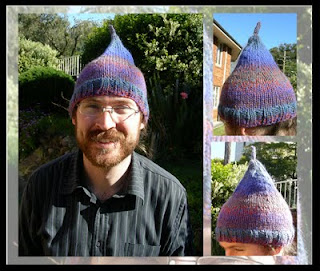 No comments:
Email ThisBlogThis!Share to TwitterShare to FacebookShare to Pinterest
Labels: Seeing the world

It's true. Your brain really does register what you want to see, not what is actually there.

It wasn't only after a few minutes, when I'm almost done editing the article, that I realised my understanding of the article is actually very different from what was actually there.

How careful are you when you read things? Do you truly understand what they're supposed to mean?
No comments:
Email ThisBlogThis!Share to TwitterShare to FacebookShare to Pinterest
Labels: Ponderings 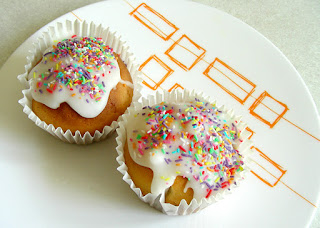 It's been a while since my last forays into cupcakes but with a friend's birthday party coming up, I thought it was a good excuse to give it a go again.

I was having a hankering for peanut butter (and also trying to finish up my numerous half-eaten jars of peanut butter in the pantry) that I decided to modify a recipe I had for chocolate peanut butter cupcakes. Basically, I went without the chocolate and added a rather generous teaspoon of vanilla bean paste (I love this thing - it makes your cupcakes turn out with little black flakes of vanilla and smells amazing). 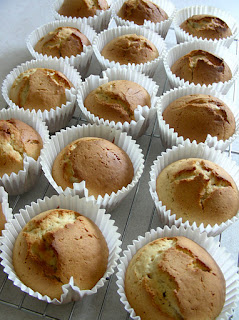 I made sure to avoid filling the papers too much with batter this time and I think they turned out quite well! I love the taste of the cupcakes. So much so that I think I will use this recipe again.

My forays into icing were not quite so successful (again) however: 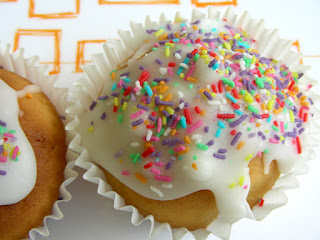 I had bought this cake decoration kit a while back and the initial plan was to do like an ice-cream swirly thing on top. Unfortunately, my combination of lemon juice and icing sugar was just a bit too conservative and I ended up with this really thick paste that made it rather difficult to squeeze through the tube.

Then I overcompensated and made it a little too runny so in the end, I simply smeared some icing on top of the cake, sprinkled some coloured sprinkles and called it quits.

I love the taste of the zingy icing. I'm not sure I like how it looks. Oh well. Next time. 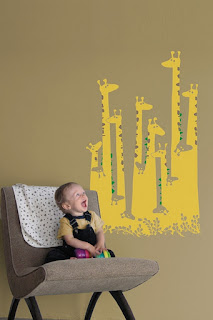 This picture makes me happy and no, it's got nothing to do with that rather delighted child.

Giraffes are probably one of my favourite animals in the world. My other favourites are alpacas, and I think I can see why I like them too, in a long-necked, owner of soft, warm and luscious yarn kind of way.

In all honesty, I don't know much about giraffes. It's not their amazing sense of loyalty (are they loyal?) or their strength (fancy a giraffe ploughing anyone?) that appeals to me. Heck, I don't even know if they actually "talk" like how cats meow and sheep baa. In a completely superficial way, I will admit I like giraffes simply because of the way they look.

The common use of orange and yellow to depict them is enough to win me over. Not to mention the crazy long neck. The strange splits that they have to do so that they can get close enough to the water to drink. The two horn things at the top of their heads. The random splotches of brown on a yellow skin. And that weird blue tongue.

I ♥ giraffes. Just thought I'd put it out there.

And isn't the artwork just gorgeous? You can get it as a wall decal or a t-shirt. Brilliant.
No comments:
Email ThisBlogThis!Share to TwitterShare to FacebookShare to Pinterest
Labels: Ponderings

Because of the different-ness in my name, I often have to give people instructions on how to spell it.

"Melody as in music"

That usually works . . . until today.

Who in the world has sun-tan as their last name?!?!?!??!
No comments:
Email ThisBlogThis!Share to TwitterShare to FacebookShare to Pinterest
Labels: Ponderings

Summer, are you coming? 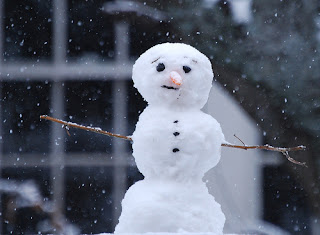 Image by Melinda Shelton
No comments:
Email ThisBlogThis!Share to TwitterShare to FacebookShare to Pinterest
Labels: Ponderings 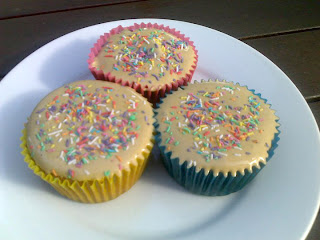 I first had a s'more a few years back at a friend's place and true to its name, I really wanted some more, so I really couldn't pass up the idea of a s'more cupcake. I suppose I was more curious than anything as to how a s'more cupcake would turn out.

Think it might be all in the icing. The cake itself and finding chunks of chocolate (I used a block of Cadbury's chocolate) in every other bite was absolutely amazing, but as can be seen in picture above, my icing was a bit of a failure.

For reasons that still eludes me, my icing ended up being extremely running, which was nowhere near the marshmallow icing that it called for. It was full of golden syrup, which made it really sweet (in a good way), but the liquid nature made it a little hard to eat without making a mess.

Maybe I'll try the icing again one day, but probably not some time soon.

And I also realised that I should perhaps invest in a better camera than just relying on the camera on my mobile.