I actually quite enjoy xfacta's photo challenges, so here goes another one on the theme of wash.

This time, I couldn't quite decide, so I ended up with two photos. 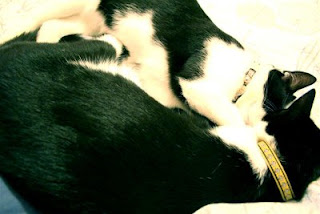 After wash
The cat on the top of the photo is Checkers, and the other is Domino. I was pet-sitting them last week and they are such adorable and affectionate little kittens/cats. Well, Domino more than Checkers, who is a bit of a scaredy-cat.

But this photo opportunity came up while I was reading in bed. First Checkers came and snuggled next to my legs (which are under the blanket), and then Domino joined us in bed. Checkers started licking Domino on the head, which prompted some rather loud purring. Then Domino proceeded to do the same to Checkers, which caused even more purring.

For the next ten minutes or so, these two cats were licking each other (even in the ear, which grossed me out a bit) and giving each other a wash and purring away. It became a wash/snuggle/purr party. It was the cutest thing.

Then they fell asleep. Domino actually had her arm around Checkers initially, kind of like she was hugging her, but by the time I got the camera and took the photo, they had somewhat changed positions. 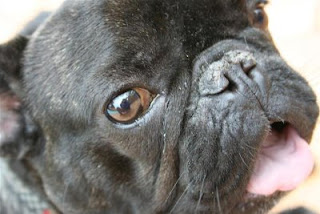 Needs a wash
This is Louis. A rather unfortunate looking French bulldog who sounds more pig than dog. I had to turn up the volume while watching TV just so that I can hear it over his snorting.

Despite not being your typical cute puppy, this pig/dog is quite charming in his own little way. He likes company, but doesn't like being petted. He loves going for walks, but only lasts for about a block. He especially loves it when you play frisbee with him, not in the throw and catch way, more of the "I'll grab it with my teeth and we'll see how good you are at prying it off me" kind of way.

I took this photo before the photo challenge came up. But I just had to use it because it's just so appropriate since when the photo was taken, the dog badly needed a wash.

We washed him that very afternoon, but it needed two people. One to hold him down, the other to scrub.

Oh, and if you look closely, you may be able to see my reflection in Louis' eye.

Email ThisBlogThis!Share to TwitterShare to FacebookShare to Pinterest
Labels: Photograpy

those cuddling cats are very cute, not sure about cleaning each others ears though - eeew!

as for Louis, he looks cute!
i wonder if he snorts like the koalas here do?