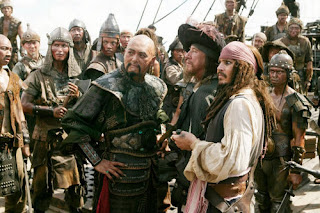 How odd to be watching the Pirates of the Caribbean 3 and realising that there is a pirate lord in Singapore.

Even funnier to see him being played by a Hong Kong actor famous for cool action movies when I was growing up.

Yes, I know that the movie is merely a figment of one's imagination, but it was still pretty surreal to see Hollywood's depiction of Singapore, albeit who knows how long ago.

A few things I learnt about Singapore from Pirates:
Seriously though, third time around and Pirates still hasn't failed to entertain. How could it? It had Johnny Depp!
Email ThisBlogThis!Share to TwitterShare to FacebookShare to Pinterest

I thot it sucked. The best Pirates, to me, is the 1st (Curse of the Black Pearl). The 2nd 1 was so-so and the 3rd REALLY bored me.

I was struggling to stay awake and got really annoyed bec it was a bore. I thot Johnny, Bill and Greg were fantastic (and Keith Richards) but still, the movie ... failed to live up to the hype. But that's just me. :)

And yes, Singapore's coastline does not look like that!!!!