There was once a backyard in the city. An ordinary backyard, grass, clothesline, a tree stump, the likes.

Then the owner of the house that was attached to the backyard started having dreams. He was after all a country boy trapped in the city.

First he started a small vegetable garden, growing peas, tomatoes and cucumber. Then he got more ambitious.

He spent many a night sawing, cutting and hammering away. One day, this appeared. 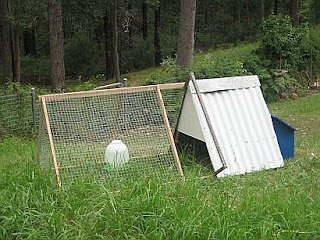 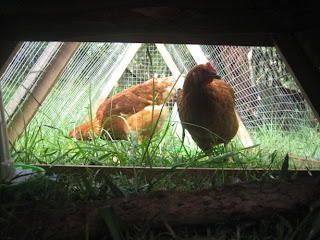 Even his girlfriend who was raised in the city and had only ever lived in the city started getting won over. "They are rather cute," she thought.

In the same backyard however, was a less than cute little Pomeranian that belonged to a housemate. It was harmless, but loved barking.

It did leave the chickens alone and was in fact just a tad afraid of the chickens, who were after all slightly bigger than him.

So they lived peacefully in the same backyard, largely ignoring each other.

Until country-boy-who-was-trapped-in-the-city had to go away for a convention, leaving his girlfriend to look after the chickens.

What she was not prepared for however, was an image that would leave her traumatised for the rest of her life.

When she was changing the water one day, said barking dog started sniffing a chicken rather closely. In fact, he simply followed the chickens wherever they went.

"Strange," she thought, but continued changing the water.

And that was when it happened. Said dog got on its hind legs behind the chicken and started trying to mate with it.

She was horrified. Images of chick-pups flashed before her as she yelled at the dog to get away.

The dog scurried off, but not without looking forlornly at the chickens.

When she returned the next day to let the chickens out of the cage, he started committing the unmentionable again.

She left the animals alone for the morning, and could only hope that nothing untoward happened to the chickens.

Today, however, she came across this that would perhaps save the chickens forever...
Email ThisBlogThis!Share to TwitterShare to FacebookShare to Pinterest