10 months. That's how long it took for me to knit up this sweater. 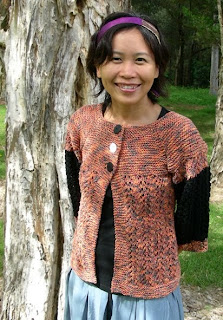 Sure, there were loads of other projects in between, but this sweater definitely needed stamina and patience. There were times when I really wanted to simply give up. I'm used to knitting up quick stuff that take at the most a month to complete. I'd never attempted something so big and so cumbersome for such a long time.

But well, in a grand story of perseverance, stubbornness and perhaps sheer stupidity, I've completed my June lady sweater! (It's called the February lady sweater, but I started it in June last year, so well...) 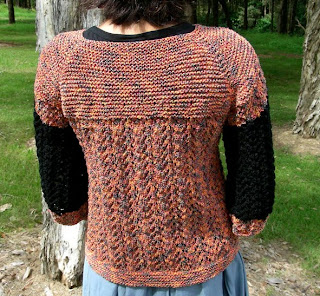 It's not that hard a design actually. It just needed concentration at some parts sleeves, increases, etc. The lace repeats were really easy and I had them memorised soon enough.

The sleeves are alternated black and orange not solely because of design - I just didn't have enough orange yarn for the whole sleeve. I had initially wanted the sleeves to be super-long, but well, a lack of yarn meant it stayed 3/4 long. I don't think it looks half bad though.

And because I just cannot have things looking too normal, I decided to alternate the colours of the buttons too. 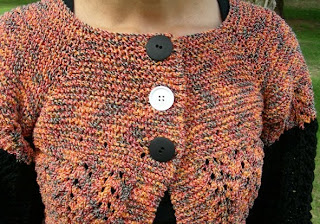 And just in time for autumn!

Now, what grand project will I embark on next?

It's really lovely. I've been intending to knit that for AGES.