This art attack from X facta actually had a deadline, which explains why I got my act together so quickly.

We were meant to choose a photo and alter it, and since I'm not so much a print and canvas kind of girl, I decided to go with the good old fashioned Photoshop way.

This photo was taken late last year, when we took D's brand new (to him, it was a second hand Ebay steal) catamaran on her maiden voyage. This was just after we finally set her up, ready to sail. 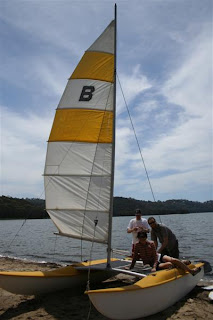 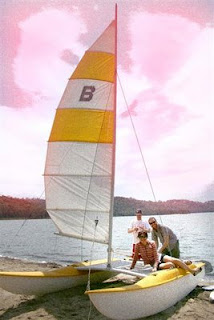 After
Added a red tinge because I always think there's something magical about a red sky. Also gave the photo a kind of grainy wash so that it looked like an old photo, but the effect may not be picked up because the photo on the site is too small. But trust me, it's there, and it's cool.

And also gave us a bit of a highlight so that we won't hidden in the shadows too much.

A simple alteration I suppose, but I had fun nonetheless. I wish I could spend all day digitally altering photos...

Email ThisBlogThis!Share to TwitterShare to FacebookShare to Pinterest
Labels: Photograpy