I'm still on a mission to finish up the 10kg of flour that D bought, but things came to a standstill when I decided to go dislocate my elbow.

The elbow is starting to feel a bit more like normal now though and so my mission continues.

D had a bunch of porridge oats and sugar lying around as well so I decided to make some oatmeal cookies. 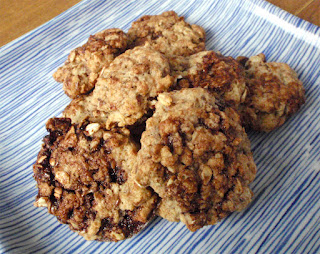 Pretty simple recipe, not even too hard to mix with my munted arm!

Made several modifications to the recipe (mainly because I wanted to use up what we already had and didn't want to buy new ingredients since we're leaving in under three weeks), namely:

The cookies still turned out pretty yummy though. Made so much D brought a batch to work to share.