Yes, the mission continues. This time, in the form potato scones. 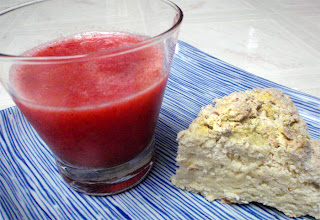 Honestly, I wasn't too impressed, even though D did like it. I think I was more impressed with the strawberry smoothie that I made. It was delicious and oh so pretty! We had frozen some strawberries whole. When they thawed out they were rather squishy and not so tasty. It tasted great in the smoothie though! I'll put the "recipe" for the smoothie below.

Regarding the scone, the main difficult was trying to convert all the metric measurement into American, seeing that I've only got American measuring cups and no weighing machine. I'm not sure if I got all the proportion correct, because I ended up having to put a whole lot more soymilk into the mixture just so that it would stick. I'm not sure if my problem was that I used soy instead of cow's milk as the recipe suggested, but it took more than the four tablespoons suggested to get the dough to stick together.

Even after that, it was still a little bit flaky and it was really a matter of just piling a whole bunch of flour on top of each other and putting it into the oven.

I may have made the dough a little too thick as I didn't feel that it was too cooked in the middle after I took it out of the oven, but D thought it was fine. If I do this the next time, I'll probably make it flatter and wider.

One thing though, it was surprisingly salty. Not bad salty, tasty salty, just when you look at the pale thing, you kind of expect it to be tasteless.

The recipe did suggest doing a milk/egg glaze over the top so that it would brown, but I was too lazy.

All in all, it's a rather quick and easy recipe (albeit slightly messy since you have to use your fingers to mix and knead and stuff) for a kinda tasty meal - so long as you cook it well enough.

Strawberry smoothie ingredients (for one serve)
Ice - about four or five cubes
Strawberries - about four or five big berries
Orange juice - half a cup or so
Honey - a tablespoon or so (or to taste)
(in a different concoction, I also added oats - tasted like a great breakfast smoothie)

Email ThisBlogThis!Share to TwitterShare to FacebookShare to Pinterest
Labels: Baking