I started work on this way back in July last year, and only finished it a month before I left for Canada. Ironically, it's probably one of the easiest and mindless kind of pattern I've done in a while and could probably have been finished in a few days. 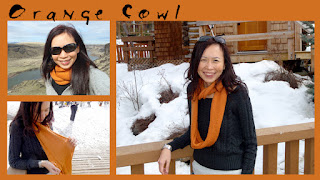 Uni started not too long after I cast on, but it wasn't only because I was juggling two subjects last semester. Ashamed to say the main reason was just sheer laziness - I took forever to buy a new ball of yarn after running out.

But, I finished it just before I left for Canada and boy has it been a treat! The 100% certified organic Australian merino wool it's made in makes it feel so incredibly cosy, warm and soft against my neck. I usually wear it only doubled-up, but when it gets really cold and windy, I triple it and it makes an incredibly difference.

The wool makes it warm, but the merino part means it's not scratchy and I could wear it all day, which comes in rather helpful when you're out all day in a snow-covered environment!

Really like the fact that it's a cowl, so no loose scarf ends, which makes it so easy to handle and wear. Unfortunately, the design on the edging can't really be seen, largely because the cowl prefers to curl into itself. It doesn't affect the warmness, it just doesn't show the beautiful long horizontal lines it has.