Who would have thought I'd spend Saturday evening on a race track, first watching cars race and then watching drivers deliberately ram their cars into each other, with the sole determination of fully wrecking their vehicles?

Went to the Parramatta Speedway with some friends from work two nights ago and I have to say it was the first time in my life that I'd ever experience anything like this. 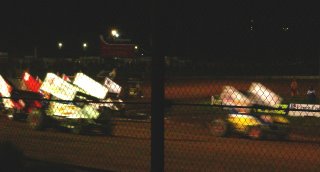 First there were the funny solar-powered looking sprintcars flying around the tracks with their engines roaring and mud flying (specks of which landed on us on time to time) which unsurprisingly led to the occassional accidents... 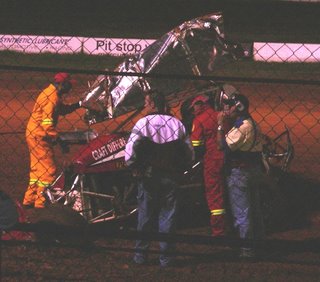 Seeing the cars fly through the air and crash onto the ground was really rather heart-stopping. The driver of this crash actually got out intact and conscious. An accident in the next race however resulted in the driver having to be sedated, car cut up to move him while still attached to his seat and driven off to the hospital because of a previous neck and back injury.

The entire process took about two hours, which resulted in the other races being cancelled/postponed (I have no idea) while we sat around chatting and listening to music.

At least they didn't cancel the demolition derby, which was one heck of a crazy event. 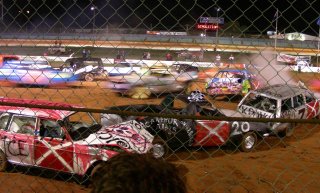 About 10 to 15 cars driving around with only one goal - smashing into each other. The last car standing was the winner, although I have to assure you that the winner of Saturday night's race would not be driving his car out on the road in a hurry. And it really wasn't standing very much. 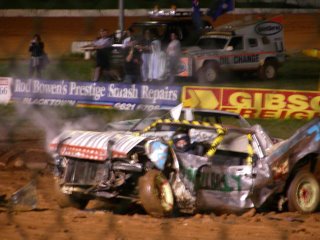 This wasn't the winner, but it gives a pretty good picture of how the cars ended up. What was hilarious was seeing the cars actually still attempt to move despite having their tyres sticking out in weird angles and boot completely smashed up.

Oh the things we do for entertainment.