Ever wonder where things like excess (brand new) plastic containers, craft supplies, fabric samples and even big street banners and giant industrial displays go to when they die?

Not the landfill, surprisingly.

Well, I suppose most do, but a large amount also goes to Reverse Garbage.

This is what they had to say for themselves:

Reverse Garbage is a not-for-profit co-operative that sells industrial discards, off-cuts and over-runs to the public for creative and practical uses, reducing the amount of waste going to landfill.

I visited Reverse Garbage about a month ago when I read about it in a magazine. Imagine my surprise when I discovered that its "offices" were located on the grounds of a old military barracks and a market springs up on the premises every Sunday!

Unfortunately, that last visit was interesting, but less than fruitful. There was nothing of interest at Reverse Garbage and the market stalls were closing (they close at 2pm). I did get a two-player board game for $2, but that was about it.

But I really loved the atmosphere of the place. It was very alternative - most of the food sold were organic, and had a very family and community feel to it. Not to mention the fact that there were real life hippies, as opposed to wannabes like me.

And because I loved it so much, I had to return. And the trip two days ago was probably the highlight of my Queen's birthday long weekend.

The lovely atmosphere was still there and this time, there were a bunch of young adults busking, with music that transported me to a medieval court.

But no, that stall also sold chai tow kway! It must be the only stall in the whole of Australia that did (in my knowledge anyway)!

Ironical that the chef was not Asian, but...

Tastebuds satisfied, I decided to poke into Reverse Garbage again and found some great stuff: 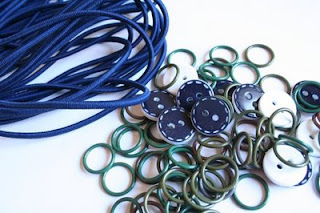 Metres of elastic band that will probably serve as hair tie for me for the rest of my life.

Some cute buttons and the little ring bits that I will soon transform into earrings (watch this space).

If you're ever in the Sydney region, I highly recommend visiting Reverse Garbage. And do so on a Sunday, you'll never be the same again.
Email ThisBlogThis!Share to TwitterShare to FacebookShare to Pinterest
Labels: Craft, Green tips

Melody, I'm surprised that there aren't any decent Chinese restaurants in a big city such as Sydney that would do a decent Char kway teow... I thought it's bad enough in l'il ol Auckland?

we used to have a place like this in melbourne, it was always interesting for a fossick, and really gets the creative juices flowing coming up with uses for the weird and wonderful things in the buckets, bins, and shelves

Mansfield - there probably is a place that sells good CKT, but I just haven't found it yet :) I have a tendency to avoid Chinese restaurants when I'm dining out. Not sure why, it just happens...

Kel - I agree! I was so inspired when I was in the shop, but there's only so much you can do with the time you've got...