The Long Overdue Writeup on Bangkok...

...which was delayed thanks to a combination of laziness, a preference to spend time with my brother who was on school holidays (or was skipping classes, I never figured out which) and a bad bad case of sinus attack. 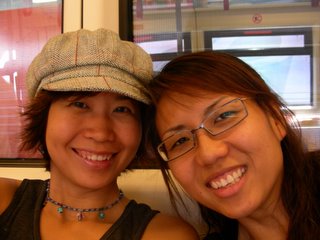 Taken on the Bangkok BTS (the city trains)
We left an extremely wet and grey Singapore early on Sunday morning to arrive in Bangkok just past noon. Dumped our bags and immediately started what would be a shopping frenzy that lasted four days (although by the fourth day, I was fast getting sick of shopping and was looking forward to going home).

Three to four months of forced abstinence from shopping prior to the Bangkok trip certainly helped. It was simply amazing how cheap things are in the country. With the money I saved, I think I probably bought three times as much stuff as I would have gotten had I shopped in Australia. I mean, most of the stuff I got cost me less than $15, and we're talking dresses and shoes here.

The best part about shopping in Bangkok are the numerous markets found in the city. Not only are you able to bargain your way into a good deal (which was Faith's duty during the trip as she does a far better job acting cute and endearing than I could ever achieve), most items are probably much more unique than your normal shopping mall fare.

The Chatuchak Weekend Market, which we went to on our first day, and the Suan Lum Night Bazaar, which we could not get enough of and had to return a second time.

The problem with Chatuchak is that because it is only open during the weekends, it invariably draws scores and scores of people. The stuff are nice, but the crowd and heat does get unbearable after a while.

Suan Lum on the other hand is simply unbelievable. This is the place to go if one likes vintage wear, or unique handmade one-off pieces. No mass produced ordinaries to be found here. Suan Lum attracts a rather different kind of crowd and its stallholders are usually the artistic and creative types. This in turn influences either the clothes they bring in, or the clothes and stuff they make with their own hands.

At least in Suan Lum, I did not really have the fear of buying sweatshop produced items. And with it being a night bazaar bodes extremely well for a night owl like me who isn't too fond of humid heat.

The only problem with shopping in Bangkok is the fact that the clothes were made in children's sizes or something. I felt like some kind of overgrown giant in most shops where it was close to impossible to fit into the clothes that I fell in love with. If it weren't too short, it was too tight. And to think most of my friends think I'm small.

Faith and I also had a meal at Bed Supper Club and an attempted one at Sirocco. Unfortunately, a reluctance to dress up resulted in us being refused entry into Sirocco because we, well, I, was inappropriately attired in my Birkenstocks (I was sorely tempted to point out that my footwear actually cost more than the outfits of some of their guests put together). Seriously, I had never been turned away from a restaurant before. It was all rather...embarrassing. At least they were nice about it.

More on our dining experiences here.

All in all, Bangkok was a fun shopping trip. Having been to Bangkok several times as a tourist, the trip this time was pure business - shopping, which I can stay away from for the next few months, what with what I've got from Bangkok.

Faith's photos on our trip here.
Email ThisBlogThis!Share to TwitterShare to FacebookShare to Pinterest